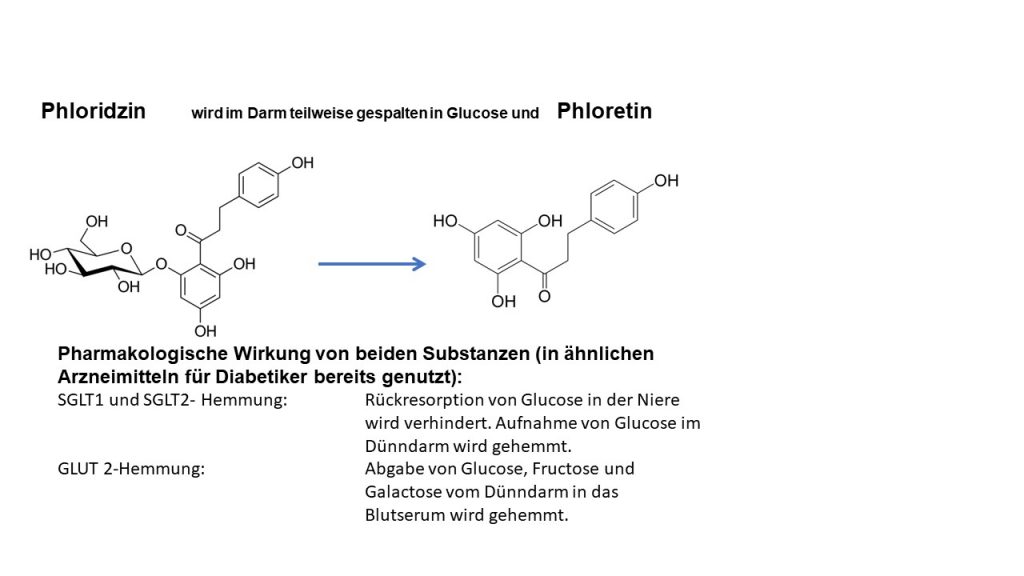 In passing through the surface of mammalian erythrocytes, the common monosaccharides evidently make use of a special “carrier” system (l-6) which is strongly inhibited by phloretin, the aglucon of phlorhizin (2, 7). In most species, the activity

Is phlorizin or its aglycon the inhibitor of intestinal glucose transport? A study in normal and lactase deficient man.

Inhibition of glucose transport by phlorizin was examined in man by perfusion of an isolated small bowel segment. Inhibition was similar in normal and lactase deficient subjects. Since the small bowel of lactase deficient subjects contains only very small amounts of phlorizin hydrolase, phlorizin and not a product of enzymatic cleavage is the inhibitor of the small intestinal glucose carrier.

Department of Nutrition, School of Medicine, University of Tokushima, Japan.

Jejunal disaccharidase activity and the number of Na(+)-dependent glucose transporters were determined in rats maintained on a low-starch diet, a high-starch diet, or low-starch diets containing various amounts of phlorizin (0.1%-0.9% wt/wt).

Dietary phlorizin increased the jejunal disaccharidase activity and Na(+)-dependent glucose transporter expression. The trigger for these changes may have been due to an increased luminal glucose content.

AN EXAMPLE OF MUTUAL COMPETITION BETWEEN TRANSPORT INHIBITORS OF DIFFERENT KINETIC TYPE: THE INHIBITION OF INTESTINAL TRANSPORT OF GLUCALOGUES BY PHLORETIN AND PHLORIZIN

Department of Biochemistry of the Swiss Federal Institute of Technology (E.T.H.), Zurich (Switzerland) (Received May i8th, 1972)

SUMMARY I. Kinetic analysis allows the detection of mutual competition between transport inkibitors of similar or of different kinetic type. 2. Phlorizin, a fully competitive and phloretin, a fully non-competitive inhibitor compete mutually for the transport system(s) of glucalogues in hamster small intestine. This observation suggests common step(s) in the mechanism of inhibition by phloretin and phlorizin.

Phloridzin is the specific and competitive inhibition of sodium/glucose cotransporters in the intestine (SGLT1) and kidney (SGLT2). This property which could be useful in the management of postprandial hyperglycemia in diabetes and related disorders. Phloridzin is one of the dihydrochalcones typically contained in apples and in apple-derived products. The effect of phloridzin orally doses 5, 10, 20 and 40 mg/kg body weight on diabetes was tested in a streptozotocin-induced rat model of diabetes type 1. From beneficial effect of this compound is significant reduction of blood glucose levels and improve dyslipidemia in diabetic rats. As a well-known consequence of becoming diabetic, urine volume and water intake were significantly increased. Administration of phloridzin reduced urine volume and water intake in a dose-dependent manner. Phloretin decreases of food consumption, as well as a marked lowering in the weight. In conclusion, this compound could be proposed as an antihyperglycemic and antihyperlipidemic agent in diabetes and potential therapeutic in obesity.